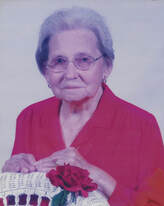 Funeral services for Ms. Amanda Earlene Collins Willhite will be held Monday, May 9, 2022 at 11:00 AM in the Chapel of Higgs Funeral Home in Soperton.  Burial will be in the Beulah Baptist Church Cemetery in Wheeler County.  Reverend Donny Brown will officiate.  Ms. Willhite died Friday, May 6, 2022.

Ms. Willhite, the beloved grandmother of Karen Taylor, was born on April 8, 1926 in Wheeler County to David Washington “Wash” and Sally Naomi Bright Collins. She was born the middle child of five siblings and the first born daughter. She remained in Wheeler County for her entire life.  She went to her heavenly reward on May 6, 2022 at the Treutlen County Health & Rehabilitation Home in Soperton from injuries sustained from an accidental fall on March 31, 2022 at her home. She was a trooper to the end. During her employment years, she worked tirelessly for her family at Ailey Manufacturing and the Mt. Vernon Shirt Factory in Montgomery County, GA. During her younger years, she enjoyed cooking for her family and friends some of the best cream cheese pound cake around. She also enjoyed traveling to the mountains and seeing different places. She positively enjoyed seeing George Jones, Conway Twitty and Bill Monroe perform on stage. She had a huge addiction to coffee. She would drink it like it was a “big ole glass of southern ice tea”. Nothing made her coffee taste better than dipping vanilla cream cookies in it. In addition to her parents, she was preceded in death by her one and only husband, James T. Willhite in 1982, her three brothers, Morgan D. Collins in 2002, Charlie W. Collins in 2011 and James E. Collins in 2019.

Visitation will be held Sunday night from 6-8 PM at the funeral home in Soperton. The family will be meeting at the home of Karen & Shannon Taylor in Wheeler County.
Proudly powered by Weebly