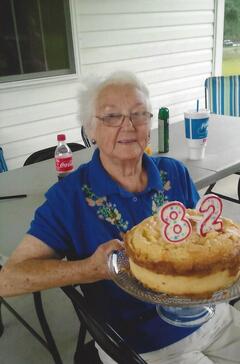 Funeral services for Ms. Hazel Hardy will be held Wednesday, April 13, 2022 at 2:30 PM in the Chapel of Higgs Funeral Home in Soperton.  Burial will be in the Red Bluff Baptist Church Cemetery in Treutlen County.  Reverend Tommy Veal will officiate.  Ms. Hardy died Sunday, April 10, 2022.

Ms. Hardy, 85, was the daughter of the late Mander & Annie Bell Edge Watts.  She was born in Treutlen County on June 18, 1936. There she attended school and was a lifetime resident of the county.  She was married to her late husband, Ray “Dozie” Hardy for 64 ½ years.  She was retired from the Treutlen County Board of Education where she worked for many years as a member of the Lunchroom Staff.  She was also a longtime member of the Lothair United Methodist Church.  Her husband, Ray Hardy; son, Chuck Hardy; grandson, Jase Williams and brother, Howard Watts, all preceded her in death.
​
She is survived by her three sons, Andy (Fay) Hardy & Tommy (Robbie) Hardy, all of Soperton and Kenneth Hardy of Douglas; brother, Eugene Watts of Soperton; sister, Louise Toler of Soperton; seven grandchildren, eighteen great grandchildren and three great great grandchildren.

In lieu of flowers, the family requests that donations be made to the St. Jude Children’s Hospital or the Lothair United Methodist Church in Treutlen County.
Proudly powered by Weebly