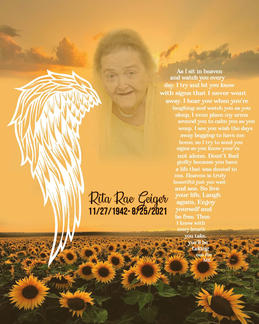 Ms. Geiger, 78, was the daughter of the late Earl L. & Margurite Newman Walters.  She was born in Salina, Kansas on November 27, 1942.  She graduated from high school in Kansas, lived on several military bases with her husband and moved to Treutlen County in 1975.  She remained there until moving to Oak Park in 2015 to live with her daughter.  Ms. Geiger was a retail store manager for Flash Foods for over 30 years and was a Catholic.  She enjoyed spending lots of time with her grandchildren and great grandchildren because they were her “Pride & Joy”.  She was preceded in death by her husband, Carl D. Geiger, Sr. and three sisters, Audrey Ragland, Kay Neubauer & Margie Flo Newman.

Visitation will begin at 2:00 PM Sunday at the funeral home.
Proudly powered by Weebly