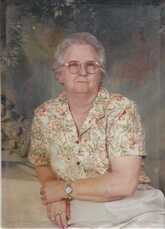 Funeral services for Ms. Martha Louise Parrish Padgett will be held Wednesday, September 15, 2021 at 11:00 AM in the Chapel of Higgs Funeral Home with burial to follow in the Red Bluff Baptist Church Cemetery in Treutlen County.  Reverend Curtis Sumner will officiate.  Ms. Padgett died September 12, 2021.

Ms. Padgett, 81, was the daughter of the late Henry Franklin Parrish and Gladys Louise Chappell Parrish. She was born in Dublin, GA on July 22, 1940.  She was a lifelong resident of Treutlen County and a high school graduate.  She was a housewife and homemaker as well as a former employee of Soperton Manufacturing and UniRoyal of Dublin.  She was Baptist by faith and attended Orianna Baptist Church.  Her husband of 56 years, Lemuel Padgett; her brothers, Deque, Raymond and Jack Parrish and her granddaughter Joyce Wickstrom, all preceded her in death.

Visitation will be held from 6-8 p.m. Tuesday, September 14, 2021 at the funeral home.
Proudly powered by Weebly